This was added in Volto 13 as an experimental feature. During the experimental phase, we realized of several issues hard to solve, which made us rethink the feature into its second incarnation, available since Volto 14.

The first implementation wanted to unify both backend and frontend under the same sun, using the Accept header to route the requests to the API and the Volto SSR server. As a reference and for the record, these were the major issues we encountered (https://github.com/plone/volto/issues/2706):

For all these reasons, we have reconsidered and adjusted the feature a bit to overcome all the issues found in the past.

Seamless mode will no longer try to unify both frontend and backend servers, differentiating them using the Accept header. However, we are sticking to the name since it also depicts the intention of the feature: to ease the setup of Volto deployments.

Seamless' mode main challenge is to achieve Zero configuration avoiding hardcoded API_PATH or other environment vars involved, and establishing good sensible defaults when setting up deployments (and also in development). So the Developer/DevOps doesn't have to overthink their setups.

These are the problems we wanted to solve:

Seamless mode is a set of features in itself. Here is a brief introduction of them:

All the environment variables that are configurable now work at runtime, not at build time. This works since Volto 13.

From Volto 13 onwards, you can now do:

This brings you a lot of power since you don't have to rebuild on every config change. You can also generate builds on your CI, then deploy them anywhere.

Since plone.rest 2.0.0a1, Plone provides a way to access the RESTAPI without using the application/json Accept header. It enables a new traversal handler ++api++ that returns RESTAPI calls seamlessly, without any additional path in its responses.

Seamless mode will use this convention when setting up development and production environments for you. So if no RAZZLE_API_PATH is present, all backend calls by default will assume a ++api++ is present in your backend and will try to use it.

Use Host header to auto-configure the API_PATH#

The Host header from the request is being read by the Volto server if no RAZZLE_API_PATH is present and used in Volto from the first request on. The information read in the SSR server is passed to the client app, so it also knows who the backend is.

Advantages of the seamless mode#

Delegating to the web server the responsibility of configuring how the components of the app should relate with each other, so you don't have to configure the same thing in several points of the architecture, making the whole setup less error-prone. Combined with the sensible defaults of using the default traversal route ++api++ and the runtime variables (or the absence of them), this makes deployments far easier and more predictable.

Theoretically, you could deploy several sites using the same Volto SSR server without recompiling (just using the Host header in the reverse proxy). Before seamless mode, you would've had to have a Volto build for every site domain.

Opens the door for http://servername/sitename deployments as well, so several sites hosted by the same Volto SSR server.

All internal links are app ones (thanks to the ++api++ traversal), so a link to a page /my-page will be returned by the API as is. So flattenToAppURL will still be required (for old deployments) but if seamless is adopted, it won't be required anymore in the mid-term.

The Plone classic UI is not public (which in some points clients might find ugly and problematic from the SEO point of view), so indexers cannot reach it.

Repeatable docker builds (since the config will be based on runtime). 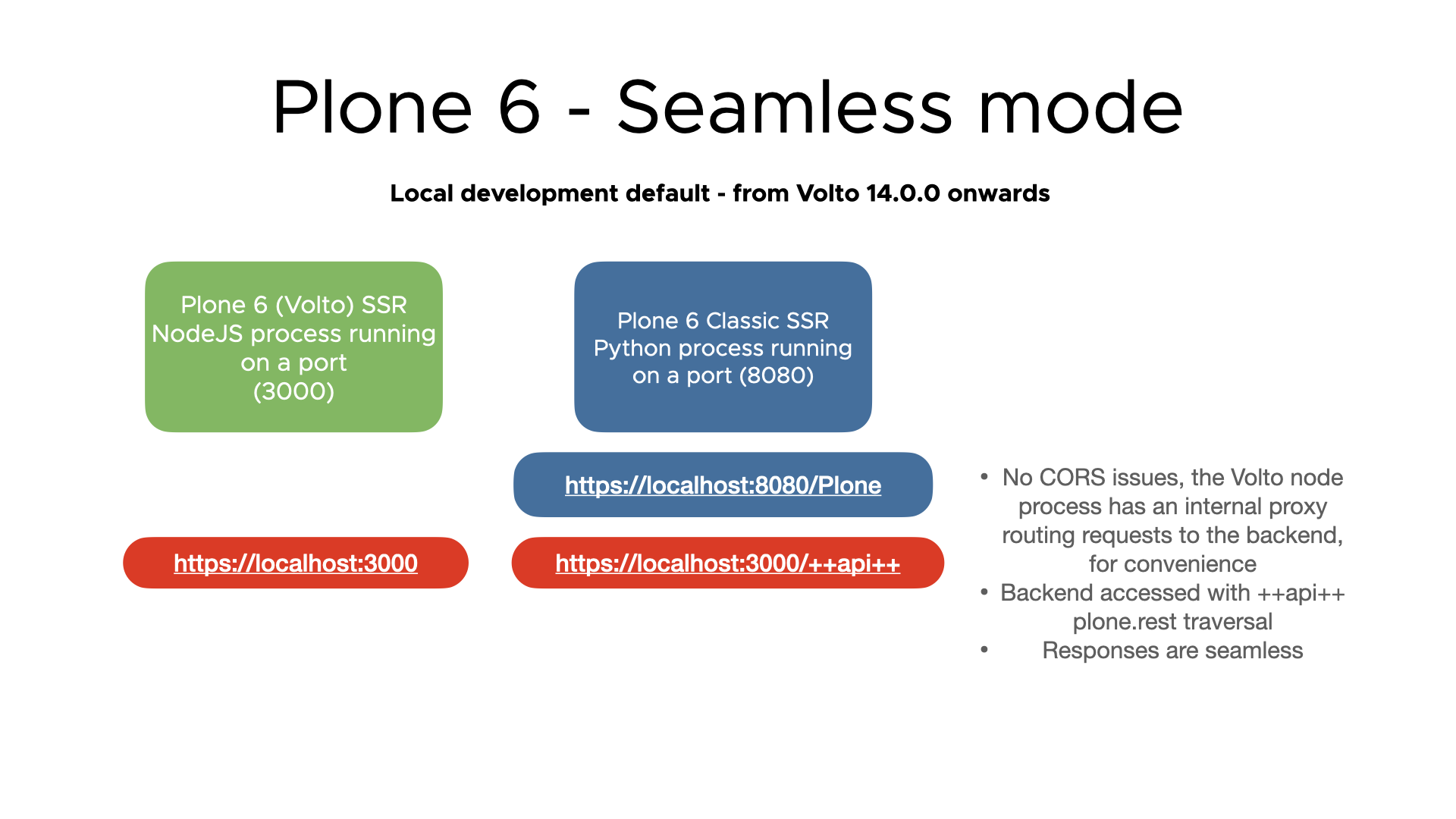 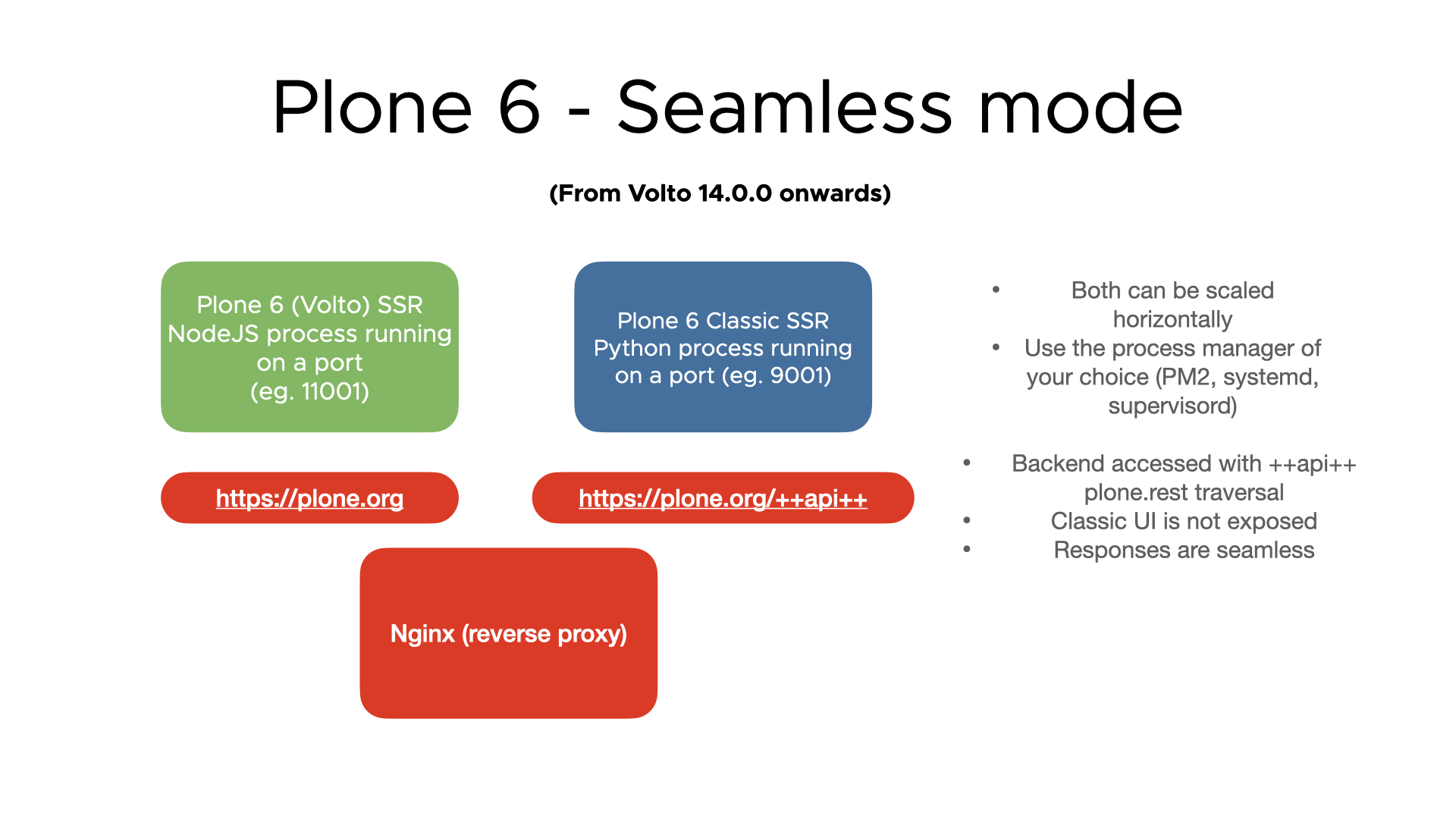 or update your pip requirements.txt if you are using pip.

If you are using the official Docker Plone image, use the VERSIONS environment variable: